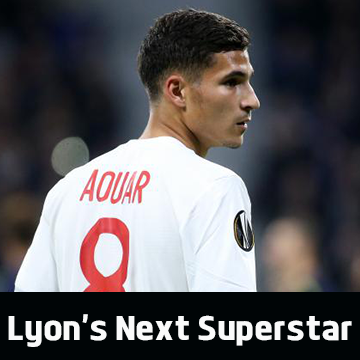 Lyon are one of Europe’s best clubs when it comes to youth development, with the likes of Karim Benzema, Alexandre Lacazette, Hatem Ben Arfa, Anthony Martial, Samuel Umtiti, Corentin Tolisso, Nabil Fekir and others all making their senior debuts at the club.

Lyon are flying this season in Ligue 1 and the Europa League with one of the youngest squads in Europe. Lucas Tousart (aged 20), Kenny Tete (22), Tanguy Ndombele (20), Maxwell Cornet (21) are all impressing for ‘Les Gones’ alongside the slightly more experienced Memphis Depay (23) and Fekir (24) as the club aim to challenge moneybags PSG over the next few years.

Skilful playmaker Houssem Aouar has started to break into the first team picture this season, and he announced his incredible talent to the World with a late brace to turn around Lyon’s game at Amiens last weekend. With the visitors trailing 1-0 with 10 minutes remaining, Aouar picked the ball up on the left touchline and exchanged passes with Ndombele before slotting home the equaliser.

It would get better for Lyon and Aouar in the 4th minute of stopping time when the youngster volleyed home Mariano Diaz’s cross to seal the three points for Lyon. Aouar’s performances have earned him a call up to the French Under 21 setup, and alerted Barcelona to his talents.

Aouar’s technique and intelligence would see him fit in to Barcelona nicely, but he would be advised to establish himself at Lyon first for what could be an exciting few years for one of the most exciting young teams in Europe.