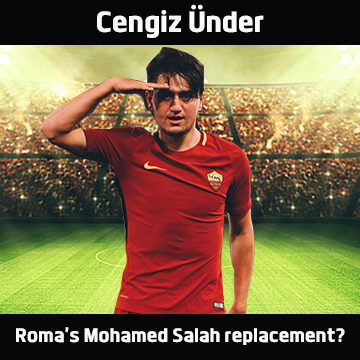 Mohamed Salah’s incredible performances for Liverpool this season has made Roma’s decision to sell the Egyptian winger for an initial €42m in the summer look foolish, but in recent weeks there are signs that I Giallorossi might have found themselves the perfect Salah replacement in young Turk Cengiz Ünder.

The 20 year-old started his career at Altınordu, and after two seasons in Turkey’s second tier he earned a move to İstanbul Başakşehir, a club that have started to challenge Istanbul’s big three at the top of Turkish football. Ünder scored 7 times in 31 league starts as the small Istanbul club ran Besiktas close to finish 2nd in the Süper Lig, the highest league position in the club’s history.

Despite helping Başakşehir to their first ever Champions League campaign, Ünder had outgrown the club and was picked up by Roma in the summer for around €13m. The man behind the move was Monchi, who made his name at Sevilla buying the likes of Rakitic and Dani Alves and selling them on for huge profits. After joining Roma in the summer, one of Monchi’s first signings at his new club was the relatively unknown Turk.

Ünder found a first team place hard to come by in his first few months in Italy, but he has taken his chance in Salah’s old position on the right of the front three and has started in each of Roma’s last 6 matches, scoring 5 times including a goal on his Champions League debut at Shakhtar.

With his pace, trickery and ability to cut inside and score goals on his left foot, Under has already earned comparisons to his predecessor Salah. If he continues his red hot start at the Olimpico, he could prove to be the latest in Monchi’s bargain signings who go on to make their mark at the highest levels of European football.