The Young Tottenham Star Catching The Eye of England And Spain 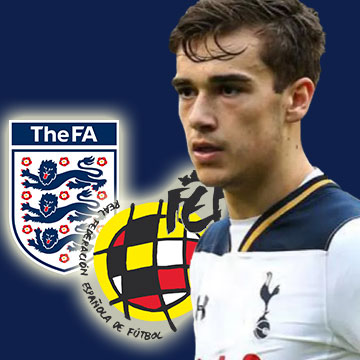 Spain are considering a shock call-up for Tottenham’s rising star Harry Winks due to Spanish grandparents. The midfielder has represented England at various youth levels but is yet to make an appearance for the senior side. So who is this player that two of the traditional powerhouses of European football are courting?

Winks is Tottenham’s most exciting academy graduate since the emergence of Harry Kane. He has gradually established himself as a reliable member of Pochettino’s squad. The 21-year-old has made a total of 31 appearances this season with 11 of those being starts.

The young midfielder is a tidy technical player who likes to keep the ball and create chances. He likes to take on opponents and is full of energy. This fits in well with Pochettino’s high pressing philosophy and he is now viewed as an able deputy for Victor Wanyama and Moussa Dembélé.

Not many players are given three new contracts within the space of a year. This indicates how quickly he is developing along with his rapid rise from academy graduate to first team squad member. For Tottenham he is turning into an important player. The next stage of his career will be the decision of his international future.