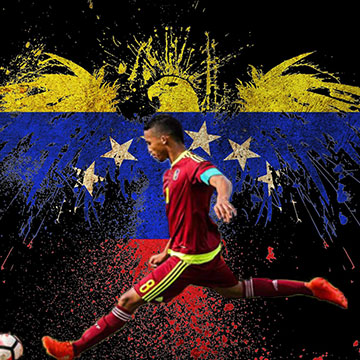 Manchester City made a surprise signing on transfer deadline day when they completed the signing of midfielder Yangel Clemente Herrera Ravelo from Atletico Venezuela. The 19-year-old defensive midfielder slipped under the radar of many and he was immediately sent out on loan to New York City.

Herrera is currently starring for Venezuela in the South American Youth Football Championship and has impressed with Atletico Venezuela over the past 12 months. City acted fast to secure his services as other European clubs had been monitoring his progress.

The midfielder is highly rated in Venezuela and has already made one appearance for the national team, coming on as a late substitute in the 2-0 defeat to Brazil. He was also part of Venezuela’s Copa Centenario squad last summer, but didn’t feature at the tournament.

Even though he is a defensive midfielder, Herrera can double as a centre-half. The teenager is two-footed and is an excellent passer of the ball. He also has a sound defensive mind, reads the game well and loves to close down his opponents. Given City’s vulnerabilities at the back this season, it makes sense why the club have signed the teenager.

Even though he was an important player for Atletico Venezuela, it is a big step-up from a sub-par-league to one of Europe’s top leagues. Especially if you also take into consideration that he is only 19-years-old and still an unpolished diamond. This will explain why he has been immediately sent out on loan to New York City.

During his time in the MLS he will be able to hone his talents under the guidance of Patrick Vieira. If there is anyone who will be able to get him ready for the high-demands of being a Premier League midfielder, then the three times league winner is the right man.