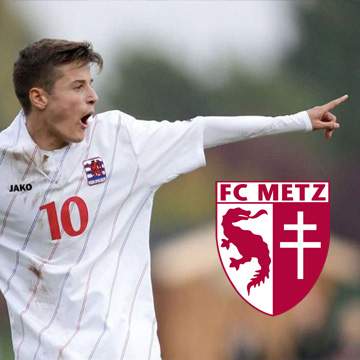 Luxembourg is not a country we normally associate with producing great talent but finally someone has arrived who has bags of potential, the youngest player ever to be capped by Luxembourg, 16-year-old Vincent Thill, who is attracting interest far beyond the Grand Duchy.

Thill was born in Luxembourg and started his playing career at Fola Esch, Progrès Niederkorn, Rodange and Pétange before crossing the border to join Metz aged 11. In February 2015, he signed a five-year deal with the French club, who achieved promotion to Ligue 1 last season.

Thill’s parents Serge and Nathalie both represented Luxembourg and his eldest brother Sébastien, 22, also forms part of the national team set-up. Meanwhile Olivier, just 19 and the only right-footer of the siblings, is with the Under-21s. Finally there is Marek, who at six already has a pretty useful left foot.

Thill is more a second striker than a playmaker although he can operate anywhere in attack. His proficiency at free-kicks, one of his major strengths, is already quite astonishing. In October 2015 he scored both Luxembourg goals in UEFA European Under-17 Championship qualifying deploying his set-piece repertoire, from 25 metres against Serbia and from 30 against Austria. His coaches emphasise that even though Thill can easily weave past opponents, he always plays in the interest of his team.

Thill has a long way to go before being compared to Lionel Messi but he admits that the Argentinian is his role model and the similarities are clear: small frame, aptitude for dribbling, ball control and a wonderful left foot. Naturally, many at Metz have also likened him to Pjanić, now with Juventus. Olivier Muet, the Metz academy coach stated that “In terms of talent and intelligence using the ball, there are similarities.”

On 25th March 2016, Vincent Thill replaced Luxembourg captain Mario Mutsch 69 minutes into the friendly with Bosnia and Herzegovina to become his nation’s youngest debutant at 16 years and 50 days old. He came on two minutes after Bosnian substitute Pjanić, who in 2008 opted to represent the country of his birth rather than that of his upbringing, Luxembourg. Luc Holtz, Luxembourg coach said “At the moment he’s not on the same planet as our other young players. It’s a pleasure to watch him play. His strength is that he rarely gets beaten in a challenge. The only way to stop him is to commit a foul.”

On the 21st September this season he made his Ligue 1 debut for Metz playing the final 10 minutes in a 3-0 defeat to Bordeaux. The game was already lost at this point and recent returners from injury have pushed him out of the squad but the future is still bright for one so young. Olivier Muet has recently said “The idea is that, ten years from now, all of Europe knows who Vincent Thill is – not to make him a great young player, but a great player full stop. His humility and those around him make him well-balanced. Coaching this kid is a lot of fun.”

Liam has been a football fanatic since the early 1990s and continues to be delighted by the sport today. He follows the 5 bog European leagues as well as the npower championship and major cup competitions both domestically and internationally. He is an FA level 2 coach and loves to be involved with football at every opportunity.