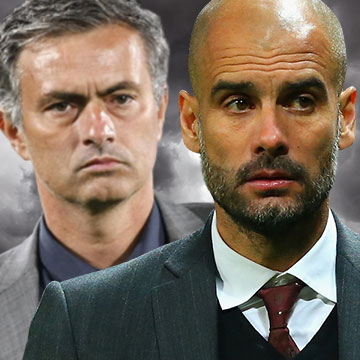 The Manchester derby is always a big occasion, especially since Manchester City were elevated to the level of regular Premier League contenders when Mansour bin Zayed Al Nahyan – better known as Sheikh Mansour – took over the club in 2008, investing heavily in the first-team squad and club’s infrastructure.

And the battle for Mancunian supremacy between Manchester United and City has provided no shortage of drama in recent years: there was Michael Owens late winner in United’s 4-3 victory in 2009, Wayne Rooney’s stunning bicycle kick to seal a 2-1 win for the Red Devils in 2011, City’s famous 6-1 triumph at Old Trafford later that year, and Marcus Rashford’s strike to grab three points at the Etihad for United last season.

But the upcoming clash between the two sides, at Old Trafford on Saturday (10 September), is the most eagerly anticipated Manchester derby ever.

The intrigue in this match lies in several different narratives. There’s the resumption of José Mourinho and Pep Guardiola’s heated rivalry, the cast of recently purchased stars set to make their derby debut, the fact that the two clubs have made an undefeated start to the season and are the current bookmakers’ favourites to lift the Premier League title in May.

The Mourinho-Guardiola dynamic will dominate most of the pre-match coverage, as two of the world’s finest and most successful coaches pick up where they left off with their mutual disdain.

The bitterness between the two festered during their time on opposite sides of La Liga’s Clásico divide, with Mourinho in charge of Real Madrid and Guardiola at Barcelona, but the seeds of their rivalry can be traced back slightly further.

By the time Mourinho arrived in Madrid in 2010, Guardiola had already spent two years transforming Barça into the best and most attractive side in Europe. But the previous season, the Portuguese had gotten one over on the Blaugrana by knocking them out of the Champions League at the semi-final stage with Internazionale.

Mourinho’s Inter utilised hyper-negative tactics to frustrate Barça’s pass masters, while the manager set about engaging in press-conference and touchline posturing to rile his opposite number.

And when Mourinho arrived in Madrid, he recognised that his side were inferior to Guardiola’s in footballing terms, so he again turned to the dark arts to gain any possible advantage; the media baiting and touchline antics recommenced.

Initially it was Guardiola who came out of top though, as his Barça thumped Mourinho’s Madrid 5-1 in their first Clásico as opposite numbers, with the Catalans claiming that season’s league title as well as the Champions League.

But as time wore on, the bitterness took a visible toll on Guardiola, and the following season, after Madrid romped to the title with a record points and goals haul, he left his position as Barça coach.

The eyes of the world will be watching to see how the two men interact on Saturday, and which of these two brilliant tacticians will outwit the other on the pitch.

There will also be plenty of interest to see which of the two clubs’ major signings will prove their worth. Zlatan Ibrahimović will be motivated to avenge the defeat he suffered to City in the Champions League with Paris Saint Germain last season, and there will be no more fitting stage upon which Paul Pogba could justify his world record £89 million fee will a stellar performance in midfield.

City new boy Ñolito has impressed since his £16 million move from Celta de Vigo, and he’ll be hoping to make a decisive contribution at Old Trafford. Both sides each signed a 22-year-old centre-back at great expense this summer too; John Stones and Eric Bailly will both want to continue their strong early-season form.

Guardiola has introduced his complexed philosophy to great effect so far this season, lining up his side in a 4-3-3 which morphs into a 2-3-5 in possession. The full-backs have been moving into the central midfield zone, with Kevin de Bruyne and David Silva – who both act as central midfielders when City are out of possession – moving into high attacking midfield areas when their team has the ball, and the rejuvenated Raheem Sterling and Ñolito pulling wide while Fernandinho holds the fort.

But City will be without star striker Sergio Agüero on Saturday, after the Argentinian was hit with a retrospective three-match ban for an elbow on West Ham United defender Winston Reid two weeks ago; will Guardiola make the like-for-like change of playing Kelechi Iheanacho as his centre-forward, or will he take the opportunity to use Sterling as false-nine and bring in Fernando to sure up the midfield?

Mourinho’s United set-up is simpler but no less effective. Their 4-2-3-1 formation offers adequate cover of the back four, with a double-pivot of Marouane Fellaini in the more disciplined role, and Pogba afforded a little more freedom to push forward, while enabling a cast of potential match-winners — in the shape of Anthony Martial, Wayne Rooney, Juan Mata and Ibrahimović — to occupy the attacking zones. Without the ball, the Red Devils fall back into a basic 4-4-1-1 shape, from which they can either employ a low-, medium-, or high-block press dependent on the opposition.

One change Mourinho may be keen to make, would be to swap Mata for a more dynamic option on the right wing. Mata has performed well so far this season, but if Guardiola intends to push his full-backs into midfield when they have the ball, a direct approach with pace out wide could exploit the space in behind City’s left- and right-backs in the transitional phase.

Henrikh Mkhitaryan would have been the ideal candidate to fulfill this role, but an injury picked up while on international duty with Armenia means the £26 million signing from Borussia Dortmund faces a race against time to be fit for the derby. Jesse Lingard or Rashford could come in instead. If Mourinho does view this area as a potential weakness of City’s, he may want to consider partnering Pogba with Ander Herrera. The Spaniard does not have the defensive acumen of Morgan Schneiderlin or even Fellaini – so in that respect it would be somewhat of a risk to play him – but his speed of thought and execution would be more conducive to springing counter-attacks than any other United midfielder. Although, Michael Carrick could offer a healthy balance between defensive cover and vertical passing ability.

Ryan is a Midlands based freelance sports writer specialising in European football. He has been fascinated with the continental game ever since he was presented with his first football kit at the age of 7 years old whilst on holiday in Spain – a Barcelona shirt with ‘Romario 10’ printed on the back. A contributor to numerous footballing websites, Ryan has also covered martial arts for local and national print publications.