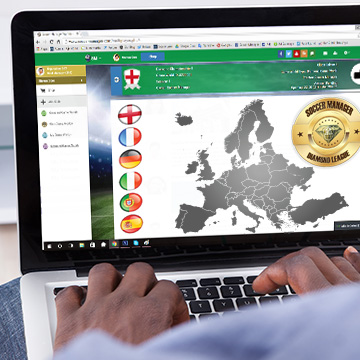 As part of our celebrations for our 10th anniversary, we are currently in the planning stage of creating a new Game World template in Soccer Manager Worlds. This is because we want a new Game World for our community to enjoy.

Now the name of the Game World isn’t important at this stage, but for arguments sake lets call them Diamond Leagues. The idea would be to create a streamlined version of the current Gold Championships. They would contain the leagues from the main five European countries in England, France, Germany, Italy and Spain. A sixth European country would be randomly selected from either the Netherlands, Portugal, Russia or Turkey as a bolt on.

Due to it only having European leagues, we will create two new cups, the European Cup and European Shield. This will give managers the chance to win additional trophies as we are aiming to build a new trophy cabinet. The trophy cabinet is part of our plans to add bespoke trophies for each league and cup within the game.

Gold Managers would be given one free pass to enter these Game Worlds each month. Non-Gold Managers would have the option to purchase a pass from the Shop. One pass would allow a manager to enter a Diamond League and if you wanted to enter additional ones, you would have to visit the Shop or wait until the following month for another free pass. We believe that by having a pass system it would make the Diamond Leagues more exclusive.