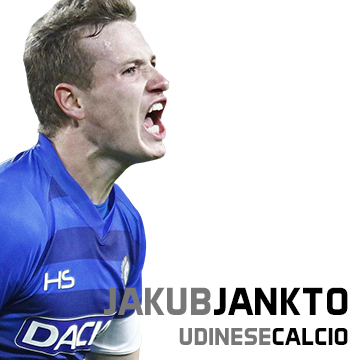 Udinese have been one of the cleverest clubs in the transfer market this century, buying players for cheap from low profile leagues and selling them on for big bucks.  The likes of  Oliver Bierhoff, Alexis Sanchez, Samir Handanovic, Kwadwo Asamoah, Gokhan Inler and Mehdi Benatia among others have used the Stadio Friuli as a springboard to bigger and better things and in Jakub Jankto the Zebrette might have unearthed another diamond.

The Czech midfielder was signed from Slavia Praha in 2014 without having appeared for Slavia’s first team, showing the intelligence of Udinese’s acclaimed scouting department. Having impressed on loan to Ascoli in Serie B last season, Jantko was recalled in the summer and has been a revelation for the Bianconeri Friuliani.

Playing in central midfield in Luigi Delneri’s 4-3-3, Jantko has scored 5 goals and registered 4 assists in 17 starts. This form has earned Jankto a national team call up for the Czech’s recent games against Lithuania and San Marino and he marked his debut with a goal.

Jankto is blessed with a hammer of a left foot and uses his pace to drive forward and support attacks. This form has caught the attention of Arsenal who are said to be readying a £10m move in the summer. Along with his compatriot Patrick Schick, Jantko has shown that after a few barren years the Czech National Team are once again ready to become a force in Europe.