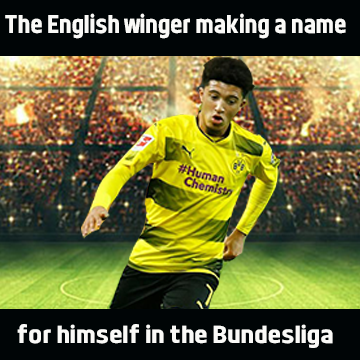 2017 was a hugely successful year for England’s Youth Teams, with the Young Lions winning the World Cup at Under-20 and Under-17 level, plus the Under-19 Euro Championships and the prestigious Toulon Tournament. Despite this success, it is still difficult for youngsters to make the breakthrough to senior football in the Premier League where there is so much money at stake that managers are reluctant to blood youngsters.

Jadon Sancho, who was named as Player of the Tournament at the Under-17 European Championships, decided to make the leap from Manchester City to Borussia Dortmund in the summer in the hope of progressing his career in a league where youngsters are given their chance.

He missed out on winning the Under-17 World Cup as his new club refused to release him, but the move already looks like a wise career choice after Sancho impressed on his full Borussia Dortmund debut against Wolfsburg at the weekend. Sancho was chosen ahead of German World Cup Winner Andre Schurrle on the left of Dortmund’s front three, and impressed so much that he is likely to be given many more opportunities in the Black and Gold this season.

Blessed with pace and close control, Sancho is a classy dribbler with a great end product, and the future looks bright for this talented young English winger, who is getting playing time in one of the World’s top Leagues instead of playing youth football like many of his contemporaries. Dortmund have a great recent record of developing talented young widemen, and Sancho will be hoping he can follow in the footsteps of Ousmane Dembele and Christian Pulisic and become a hero at the Westfalenstadion.