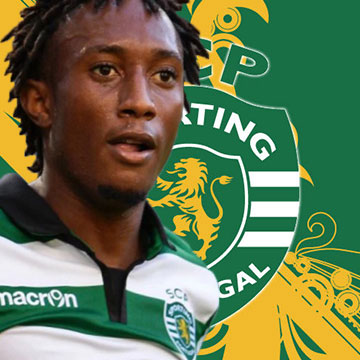 Sporting CP is famous for the success of its academy. In the Euro 2016 final there were 11 players who participated in the match who were developed in the Sporting CP academy: only Pepe, Raphael Guerreiro, Eder and Renato Sanches have never been part of this club.

Following on from the likes of Nani, Cristiano Ronaldo, Quaresma and so on, a new young winger has become a regular in Jorge Jesus’s line-up at the early age of 21: Gelson Martins.

This fast, strong, physical attacking midfielder is the surprise package in the wonderful start to the Portuguese Primeira Liga for the Leoes, with 6 goals and 11 assists in the last season and 2 goals and 5 assists to his name already this season.

Pace, speed, and  passing are his best qualities. He is also physically imposing and has very good timing, tackling and long range passing abilities. His stunning vision is the reason why he provides so many assists for his team mates.

Even though he’s not as gifted at shooting and finishing, his talent is pure and the high level performances that he has produced have guaranteed a place for him in the senior Portuguese National Team. Fernando Santos has tried to protect him and reduce the media attention on him, saying that he’s useful for the matches against the Faroe Islands and Andorra, but we all know that this young starlet is growing and showing his true value.

To confirm his ever growing reputation,  some big elite clubs in Europe have already made enquiries about him. Real Madrid, Manchester United and Juventus have their eyes firmly fixed on this diamond in the rough, but he will not come cheap: The asking price is said to be at least 45 million to take him away from Lisboa. He has recently said that he doesn’t want to talk about a new contract: Could this be a message for the top clubs?

Day by day this young talent becomes stronger. In Spain, Mundo Deportivo compares him to Figo; in Italy some say he’s quite similar to Juan Cuadrado. The only great problem, according to the Spanish tabloid, is his hastiness and impetuosity: with this mental approach he could run the risk of forging ahead in his career too quickly, when perhaps the best option for him would be to remain where he is and complete his footballling education in the Sporting Academy, where he is currently viewed as a bright prospect for the future.

Having lost Joao Mario and Slimani in the last transfer window, it would be hard for Sporting CP to replace another great player: Will he be a true champion or with so many big European clubs chasing his signature, will he be tempted to seek a transfer before he is perhaps ready. For sure, at least until the next transfer window, he will have the chance to show (mainly in Champions League) that his skills are something we would call a good investment!

Marco was born in Rome and supports Inter because of Luiz Nazario Da Lima Ronaldo. He is a Brazilian citizen because of his father’s roots. He played futsal for several years, even in the FIGC (Italian FA) as a winger, playmaker and striker. He is now studying for a degree in finance.