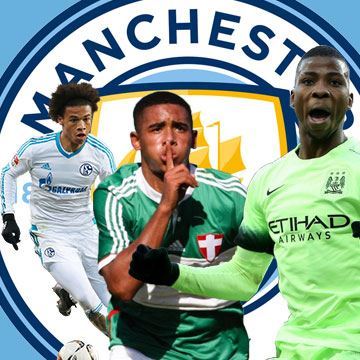 The Manchester City squad inherited by Pep Guardiola this season is a squad of the highest calibre. With several experienced stars within its ranks, many are citing the Blues as the favourites for the Premier League crown in the upcoming 2016/17 Premier League campaign.

But with experience comes ageing players and City are notorious for having one of the oldest squads in the topflight of English football. An average age of 28 admittedly has its pros and cons; first team experience comes at the cost of older players who have shorter remaining career spans.

At Guardiola’s previous two clubs, he left behind a legacy – a youth orientated philosophy. When he departed Barcelona back in 2012, his first-team squad had an average age of just 23.9, compared to 24.9 when he took charge at the Camp Nou.

That change was a result of the Spanish coach completing a mass overhaul of the existing squad. He sold multiple high profile names, including Thierry Henry (32), Zambrotta (31), Edmilson (31), Deco (30), Ronaldinho (28), instead opting to more regularly utilise the likes of Pedro (19) and Lionel Messi (20).

He also promoted Sergio Busquets (19) from Barça’s youth side and purchased Dani Alves (25), as well as re-signing Gerard Pique (21) from Manchester United.

All of the young players Guardiola either promoted or recruited remained at Barcelona for several years, with several still plying their trade for the Catalan giants.

Meanwhile the Bayern Munich outfit that he left last season had an average age of 26.8.

Longevity appears to be an intrinsic aspect of Guardiola’s DNA and the initial signs of that are already being demonstrated at Manchester City after just a month in charge.

During his unveiling at the Etihad Campus earlier this month, Guardiola declared that his players ‘have to show me and the fans again. That is the past, people don’t come here to see what we did.’ Reputation alone does not guarantee a player space in Guardiola’s frame if they do not have the right attitude or ability.

The past means nothing and the future means everything.

Since he uttered those words to the delight of the club’s supporters, City have been touted with moves for some of the world’s finest young talent. Having already snapped up Ukraine international Oleksandr Zinchenko (19), the Citizens are believed to be close to signing Real Sociedad goalkeeper Gerónimo Rulli (24), Everton centre back John Stones (22), Schalke ace Leroy Sane (20), Brazilian wonderkid Gabriel Jesus (19) and Colombian forward Marlos Moreno (19).

As well as scouting young talents on a global scale, Guardiola has already been impressed with some of the existing youngsters from the club’s Elite Development Squad during the current pre-season tour.

Fullbacks Angelino and Pablo Maffeo, centre back Tosin Adarabioyo and midfielder Aleix Garcia have all inspired confidence and appear ready for some potential first-team action this term.

These enthusiastic youngsters bode well for the future in the blue half of Manchester; blending them into the first team could also provide healthy competition for their more experienced counterparts.

Guardiola will not be afraid to incorporate youth into his line-ups, as has been demonstrated by his spells in Barcelona and Bavaria. This comes in direct contrast to Manuel Pellegrini’s unwilling stubbornness to nurture the young produce available at his disposal, even in times when the Chilean manager complained about the lack of time to recovery between fixtures.

Kelechi Iheanacho impressed far more than Wilfried Bony and yet was still behind the Ivory Coast striker until very late on last season. If Guardiola had been at the helm, he would most certainly have been given the chance to impress much sooner.

The aforementioned healthily competitive nature of the squad under Pep means that City supporters should finally see one of Pellegrini’s aims achieved: to acquire two top quality options in each position.

City will have incredible depth next season

But whereas Pellegrini appeared keen to solely buy existing brilliance for instant success, Pep will bring the addition of prudishly promoting rising stars.

Whether Joe Hart retains his number 1 jersey, is reduced to second choice or is sold, there is no doubting that he is a top quality keeper. However, mistakes riddled his outing at Euro 2016 and his poor distribution has reportedly cast doubt in the mind of Guardiola – a coach famed for goalkeepers who can play with the ball at their feet.

Young stopper Angus Gunn was the hero in City’s pre-season penalty shootout win over Borussia Dortmund and he is keen to stick around at the Etihad in order to prove himself between the posts.

However, at 20 years of age, Guardiola may instead opt to acquire an experienced keeper such as Claudio Bravo to use as his first choice, while Rulli is expected to return on-loan to Sociedad for the season.

Aleksander Kolarov could be sold, leaving Bacary Sagna, Gael Clichy and Pablo Zabaleta, the latter of which appears set to stay following links with Roma. All three of these fullbacks are versatile and able to play on either side of the defence, whilst Angelino and Maffeo are excellent young options for rotation purposes.

In between said fullbacks, the future of captain Vincent Kompany hands precariously by a thread – a thread which is still probably somewhat stronger than the Belgian’s calves. Injury issues across the past few years could make the 30-year-old a casualty under Guardiola’s ruthlessly stringent procedures.

Although it may seem ludicrous to suggest, John Stones and Nicolas Otamendi could form a formidable pairing under Guardiola’s guidance. Both are comfortable in possession and are capable of passing the ball through the lines with pinpoint accuracy, a vital element in Pep’s philosophy. Youngsters Jason Denayer and Tosin Adarabioyo fit the mould too and will be eagerly anticipating their opportunity.

Existing midfield options include Fernandinho, Ilkay Gundogan, Fernando, Yaya Toure, David Silva, Kevin De Bruyne and Samir Nasri, all of whom are comfortable in possession and able to dictate football matches to some degree.

The success of wide players Raheem Sterling, Nolito and Jesus Navas – as well as possibly Leroy Sane – will be pivotal to City’s success, or lack of it.

Up front, Wilfried Bony is available for sale, with Sergio Aguero a dead cert in leading the line as the Blues’ talisman and Iheanacho ready in reserve.

Some fans are disappointed that a marquee name such as Toni Kroos, Paul Pogba or Pierre-Emerick Aubameyang has not been obtained.

But I have a genuine belief that this season, City’s squad as a whole will be greater than the sum of its individual components. It certainly has the capacity to form the foundations for years to come.

About the author – Jordan-Luke McDonald

Jordan-Luke is a footballer writer who was a finalist at the National Football Blogging Awards 2015 in two categories. He has contributed towards Manchester Evening News, CaughtOffside and TheseFootyTimes to name but a few.