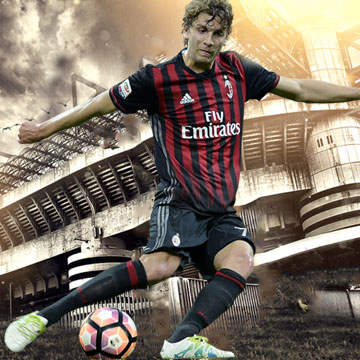 Until recently, Milan had cultivated a reputation for selling off their finest young players. Stephan El Shaarawy, Bryan Cristante, Matteo Darmian, Pierre-Emerick Aubameyang and Riccardo Saponara to name but a few departed the San Siro and fans argued that this was short-sighted planning.

However, under the tutelage of Sinisa Mihajlovic the outlook changed. Not only were the young talents staying at the club but they were also actively involved in the first team. Last season 17-year-old Gianluigi Donnarumma quickly became Milan’s first-choice goalkeeper and is now seen as the heir to Gigi Buffon. 19-year-old defender Davide Calabria was also given a run in the team and this season looks set to become Milan’s first choice right-back.

New manager Vincenzo Montella feels optimistic about the club’s long term future. This is no surprise because in the last 18 months Milan have either signed or brought back to the club several young talents such as M’Baye Niang, Suso and Alessio Romagnoli. Throw in Mattia De Sciglio who is hardly a veteran at 23-years-old (and who was also developed in-house) and along with Donnarumma and Calabria, Milan have one of the youngest starting XIs in Serie A this season.

18-year-old Manuel Locatelli looks set to be the latest name to join Milan’s every growing contingent of youngsters. The Lecco native was officially promoted to Milan’s first team in February, following Antonio Nocerino’s transfer to Orlando City. He made his debut on 21 April replacing Andrea Poli after 87 minutes at the San Siro during a 0-0 draw against Capri. On 14 May he made his full debut as a starter against Roma in Milan’s last game of the season.

The highly talented midfielder joined Milan at the age of 12 in 2009 and he has steadily moved through the Rossoneri’s youth system. Locatelli is renowned for his passing and he is an astute, creative midfielder who closely resembles Ricardo Montolivo with his style of play.

He prefers to operate from a deep midfield role where he can utilise his range of passing and dictate the game. This explains why he has also been compared to former Milan great Andrea Pirlo. Mauro Bianchessi, the club’s head  scout said “He’s a bit Pirlo and a bit Montolivo.”

Therefore it was quite apt that he replaced Montolivo at the weekend to make his fourth substitute appearance of the season. He marked the appearance with an unstoppable half volley into the top corner to draw Milan level with Sassuolo. His goal and performance will add further strength to the argument that he deserves more playing time this season.

After the game Locatelli broke down in tears as the emotion got the better of him but it showed just how much it meant to him. There is no doubt that the talented youngster can become an influential part of the Milan team and replace the player (Montolivo) that he has been compared to.