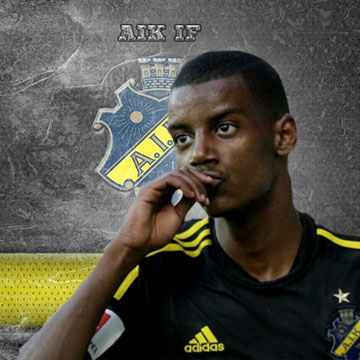 Alexander Isak recently celebrated his seventh birthday by scoring two goals in the Stockholm derby as AIK’s beat city rivals Djurgården 3-0. His performance was greeted, at the end of the game, by a chorus of happy birthday from 8,000 travelling fans. This isn’t the first time that the fans have sang his name, and it certainly won’t be the last.

The Stockholm native scored on his first team debut on 28th February 2016, when he came on as a 75th-minute substitute in the Svenska Cupen against Tenhults IF.

Isak made his full league debut 37 days later against Östersund and partnered fell debutante Carlos Strandberg in attack. Five minutes into the second half, the then 16-year-old scored the decisive second goal. The goal resulted in him making the headlines as he became the youngest ever scorer in Allsvenskan history at the age of 16 years and 199 days.

Since making his debut, Iask has become a regular fixture in the AIK team and has gone on to score six league goals so far this season. This has resulted in a host of top European sides, including Barcelona, Bayern, Liverpool and Real Madrid, scouting the striker who has been dubbed the new Ibrahimović by teammate Chinedu Obasi.

Obasi told Fotbollskanalen: “He is a great talent. He has great potential, and I absolutely believe that he will go far. I do not want to say too much, but I think he has much potential. If he has the drive and continues, I think he can become Sweden’s next Ibrahimović. He has the potential; everyone can see it, and he proves it all the time.”

Due to his height (190cm), position and nationality, you can understand the comparisons.

The Swedish media have closely been following Isak since he made his debut and have tipped him for a call-up to the national team. This is understandable as he is an exciting talent. They are also seeking a new star for their national team after Ibrahimović’s retirement from international football following Sweden’s disappointing exit at Euro 2016.

The last teenage star to emerge from Scandinavia, Martin Ødegaard, made similar headlines before vanishing into obscurity after joining Real Madrid. This is something Isak will be well aware of, and therefore his next move will be crucial as he looks to continue his rapid rise in Swedish football.