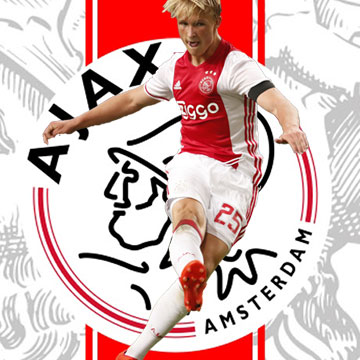 When Ajax crashed out of the final Champions League qualification round at the hands of Rostov, there was a mini uproar that striker Kasper Dolberg didn’t start either game. This may come as a surprise when you take into account that he is only 18-years-old and has only played 229 minutes of competitive football for the Dutch giants. However, in the absence of Arkadiusz Milik who has recently signed for Napoli, the Ajax fans are looking towards the extremely talented forward to be their new No9 and lead the line during the 2016/17 season.

Kasper Dolberg was spotted by Ajax scout, John Steen Olsen, whist playing in a youth tournament in Denmark. Director of Football, Marc Overmars, stated that Olsen insisted on his signing and the club acted swiftly to secure his transfer from Silkeborg. It’s worth noting that Olsen is Ajax’s Scandinavian scout. The same scout who discovered talents like Zlatan Ibrahimović, Christian Eriksen and Viktor Fischer.

Despite being injured for parts of the 2015/16 season, Dolberg scored 8 goals for the Ajax U19s and made an instant impression. New Ajax manager, Peter Bosz, promoted the 18-year-old to the first team this summer. He was duly rewarded when the striker scored on his debut against PAOK and then followed it up with a brace on his league debut against Roda JC.

Dolberg is an extremely versatile forward who can play across the front-line. Although he is comfortable out wide, with him being 6″1, his future surely lies in the middle of the park as a No9. He is skillful on the ball and has great technical ability. This helps with his dribbling as he likes to run at his opponents using his pace. Despite his tender years he looks very experienced and also works very hard off the ball.

Ajax have never been shy giving young forwards a chance. When given the opportunity, the likes of Patrick Kluivert, Zlatan Ibrahimović, Klaas-Jan Huntelaar and Luis Suárez have shone. Their fans will be hoping that he follows in their footsteps. It looks like Dolberg will cement his place in the team during the course of the season and then it is up to him to grasp his chance and become the next great Ajax No9.