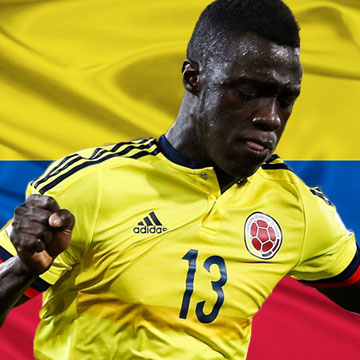 Colombia’s Achilles heel since the retirement of Mario Yepes after the 2014 World Cup, has been the lack of quality central defenders. At the Copa América Centenario, Colombia’s first choice in the heart of of defence is Stefan Medina and Cristián Zapata. However, there is a lack of options in case either of them pick up a suspension or an injury.

It was thought that Éder Álvarez Balanta was the next in-line to become Colombia’s new rock at the heart of defence. However, the River Plate defender is now 23 and hasn’t progressed into the centre-half that many thought he’d become. Therefore it has come as no surprise that the stories linking him to some of Europe’s top clubs such as Barcelona aren’t appearing any more.

So who is the next Colombian defender who is destined for greatness?

Atlético Nacional reached the semi-finals of the Copa Libertadores and their team had included several highly rated youngsters such as Davinson Sánchez and Marlos Moreno. This resulted in numerous scouts attending their games looking to bring the next big talent from South America over to Europe.

Barcelona agreeed a fee of €3.5M for Davinson Sánchez but when he discovered their intention was for him to train with the first team but play for Barça B in Spain’s third tier, he turned down the move.

It now looks like the 20-year-old is set to join Dutch giants Ajax for €5M after they fought off competition from Basel. This seems like a sensible step for the defender as Ajax are world renowned for developing talented young players. Ajax have also signed striker Mateo Casierra and having a fellow Colombian in Amsterdam should help Davinson Sánchez settle.

With Ajax looking to sell defenders Mike van der Hoorn and Ricardo van Rhijin, there should be plenty of opportunities for Davinson Sánchez to showcase his talent on a regular basis. If he impresses enough  in the Eredivisie then there is no reason why Barcelona wouldn’t come back in for him as he would be more proven and experienced at European level.

Davinson Sánchez is still uncapped for Colombia but he is a regular for their U23 national side that is set to feature in this Summers Olympics in Rio. It’s only a matter of time before he becomes a regular name in the full national team.