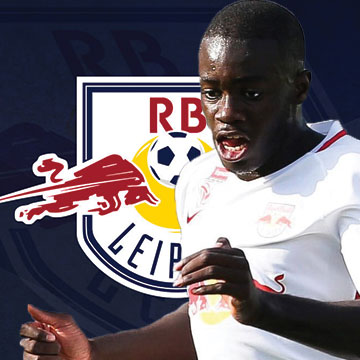 Some of England’s biggest club’s along with Juventus and Barcelona had been linked with Dayot Upamecano. However, the 18-year-old defender opted to join RB Leipzig from affiliate club, Red Bull Salzburg, for a fee in the region of £10M.

This should come as no surprise to many observers as he is the ninth player to make the journey over the past couple of seasons.

In 2015 Red Bull Salzburg recognised the potential of Upamecano and splashed out £1.8M. He was immediately sent out on loan to affiliate Red Bull club, FC Liefering, who also produce talented youngsters for all of the senior sides. After 16 appearances he was sent back to the first team for the 2016/17 season.

Upamecano became a regular fixture in the Salzburg line-up, featuring 21 times in either defence or midfield. He was one of the standout performers in the Hinrunde with his bold aggressive style and assuredness that belies his young years.

With the same build and power of a Yaya Toure or a Patrick Vieira, the 6″1 teen bullied strikers off the ball. However, the 18-year-old isn’t all about power as he has the ability and self-belief to dribble his way out of trouble or launch an attack with a precise pass in the same way Raphaël Varane does for Real Madrid.

Upamecano is held in high regard by Leipzig’s Sporting Director, Ralf Ragnick, who said on the club’s official website “We are delighted that Dayot decided to join us to make the next step in his career despite several offers from international clubs. We are convinced that Dayot can already be a reinforcement for our squad in the near future.” He also added “…he is a player who fits our club and philosophy  because of his age, potential and style of play.”

Upamecano should become a regular fixture in Ralph Hasenhüttl’s side and it wont come as a surprise if he enjoys the same success as their last signing from Red Bull Salzburg, Naby Keïta, who is currently one of the Bundesliga’s standout players.