The Five Young Stars Whose Careers Are Stalling This Season 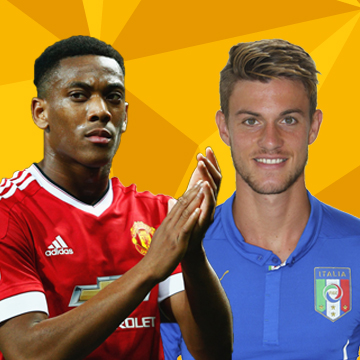 Football is rich with tales of prodigious young players who burst onto the scene and announce themselves as the next big thing, only to slide rapidly into obscurity and mediocrity; burning brightly before quickly fading away.

Whether it’s down to an inability to handle pressure, the dreaded ‘second season syndrome’ or early burnout, young players need to be handled with care if they are to fulfil their potential.

Here are five immensely talented players whose careers have stalled this season.

Atlérico Madrid centre-back José Giménez came to prominence as a 19-year-old during the 2014-15 season, making 19 starts for Los Colchoneros.

Displaying a level of maturity and physicality beyond his years, the Uruguayan youngster looked like being the long-term partner and eventual heir to compatriot Diego Godín at the heart of the Atléti backline.

Despite racking up 27 starts in La Liga and seven more in the Champions League, towards the business end of the 2015-16 campaign, Giménez lost his place to Stefan Savić, with the Montenegrin selected to partner Godín in the final of Europe’s Premier Club competition.

And the 21-year-old is yet to regain his place at the Vicente Calderón, having made one start in the Champions League and only a single substitute’s appearance in the league.

Now in his early twenties, Giménez has reached a crucial phase of his development. A lack of game-time now could see him fail to truly fulfil his potential.

A move away from Atléti would have seemed unthinkable a year ago, especially as he had just penned a new long-term contract. But out of the side and with no immediate route back to the starting line-up, Giménez has been linked with a January move to Manchester United.

In what was a frustrating season for Manchester United fans, French youngster Anthony Martial offered a shining ray of hope that things would soon look up.

Louis van Gaal’s side consistently produced a dour and uninspiring brand of slow, possession-heavy football. But with Martial, a £36 million signing from AS Monaco, either leading the line of dribbling in from the left-wing, the Red Devils had a dynamic and exciting ace in the hold.

A stunning solo goal against bitter rivals Liverpool marked a spectacular introduction to English football for the former Lyon academy player; a star was born.

Martial finished his first campaign in Manchester with 17 goals and an FA Cup winners’ medal. With goalkeeper David de Gea being voted the club’s player of the year for the third season in a row, Martial was easily the 20-time champions’ best outfield player.

This season, under José Mourinho, Martial has made just four starts in the Premier League, and looks bereft of confidence. Having netted just a single goal, Martial appears a shadow of the near-unplayable forward of last term.

Amid rumours of personal troubles and following a string of lacklustre displays on the pitch, the 20-year-old Frenchman has fallen down the pecking order at Old Trafford.

But Martial’s potential and pedigree is unquestionable; it would be foolish to bet against him returning to form in the near future.

Syria-born Germany under-21 international Mahmoud Dahoud has found playing time hard to come by at Borussia Monchengladbach this season.

After making 42 appearances in all competitions during the last campaign, Dahoud has started only four of Gladbach’s 10 Bundesliga games this term.

With five goals and eight assists to show for his efforts in 2015-16, the 20-year-old appeared set to develop into one of the finest box-to-box midfielders in Germany.

But manager Andre Schubert has pumped the breaks on expectations of Dahoud, often selecting the more experienced Christoph Kramer and Tobias Strobl as the central midfielders in his 3-4-1-2 system, with Lars Stindl and Thorgan Hazard tending to take up the more advanced midfield roles.

Despite being strongly linked with moves to Liverpool and Borussia Dortmund this summer, Gladbach resolved to hang onto Dahoud, which would suggest that, despite having fallen somewhat out of favour, he is still valued highly at the club.

Daniele Rugani has been one of the hottest defensive prospects in Italy for several years now.

The one-cap Azzurri international signed for Juventus from Empoli in 2013, but was immediately loaned back to the club of his youth for two seasons.

During this time, he impressed greatly with his calmness, maturity and ability to play the ball forward out of defence. Regarded as the future of the Italy defence alongside AC Milan’s Alessio Romagnoli, Rugani appeared to have the world at his feet.

But since joining up with his parent club at the start of last season, the 22-year-old has made only 13 Serie A starts.

The task of having to unseat one of the famous Juventus ‘BBC’ back three of Leonardo Bonucci, Andrea Barzagli and Giorgio Chiellini was made all the more difficult for Rugani when the Old Lady brought in Mehdi Benatia from Bayern Munich this summer.

During the last transfer window, Napoli were thought to be keen on signing the young centre-back, with Partenopei boss Maurizio Sarri having worked with Rugani at Empoli, but Juve were stern in their rejection, insisting that the player was not for sale.

Juventus manager Massimiliano Allegri will understandably be reluctant to break up his experienced and outstanding defensive trio but, sooner or later, the former Milan coach may have to do just that in order to ensure Rugani blossoms into the player many believe he can become.

The striker, who has also spent a large part of his fledgling career playing on the right wing, earned his nickname due to his coolness in front of goal while playing for Santos.

Inter snapped up the 20-year-old for around €30 million late in August, with the four-cap Brazil international fresh off the back of helping the Selecão win gold at the Rio Olympics.

There were high hopes that the 20-year-old would be able to ease the goal-scoring burden on captain Mauro Icardi, while adding another dimension to the Nerazzurri’s attacking play with his pace and deadly finishing ability.

But, to date, Gabriel has made just one appearance for his new club, coming off the bench for the final 16 minutes of the 1-1 draw with Bologna back in September, and is already being linked with a January loan move away from the San Siro.

About the author- Ryan Baldi

Ryan is a Midland’s based freelance sports writer specialising in European football. He has been fascinated with the continental game ever since he was presented with his first football kit at the age of 7 whilst on holiday in Spain – a Barcelona shirt with ‘Romario 10’ on the back. A contributor to numerous footballing websites, Ryan has also covered martial arts for local and national print publications.