David Neres – The Brazilian winger lighting up the Eredivisie 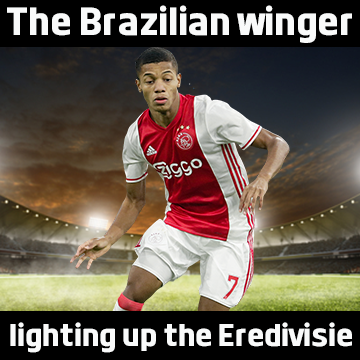 Ajax have long had a reputation for developing talented youngsters, and their current side includes the impressive Donny Van de Beek, Justin Kluivert, Frenkie de Jong and Matthijs de Ligt, but perhaps the most impressive youngster at the Johan Cruyff Arena this season is Brazilian winger David Neres.

Signed from São Paulo in January 2017, Neres had to wait until April for his first Eredivisie start, marking it with a goal against Ajax’s big rivals Feyenoord. The tricky winger went on to score twice more last season, and gained continental experience with four substitute appearances as the Amsterdam club reached the final of the Europa League.

Despite this promising start to his career in Europe, few could have predicted the incredible form Neres is showing this season. Playing on the right of Ajax’s front three, the nimble left-footer has contributed to 17 goals already this season with 8 goals and 9 assists from his 16 appearances in the league.

These stats, coupled with Neres’ incredible technical ability, pace and dribbling have seen the 20 year-old linked with many of Europe’s biggest clubs, with Juventus, Manchester United, Tottenham and Arsenal all linked. It is doubtful whether Ajax would sell in January but expect more speculation in the summer should Neres keep performing at such a high level.