Cristiano And Myths Have Distorted His Legacy, But There Is Only One Ronaldo 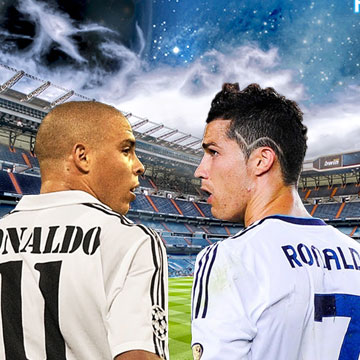 According to the Oxford English Dictionary, a phenomenon is defined as “a remarkable person or thing”. In the footballing world, superlatives are all too often worn out and overused, diluting their meaning when used correctly. When it comes to Ronaldo Luis Nazario de Lima, the Brazilian striker nicknamed “the phenomenon”, though, nothing is more fitting.

It says so much about a player who in many people’s view is the greatest centre forward the game has ever seen that there remains an element of tragedy when reflecting on his career. Successful stints at PSV Eindhoven, Barcelona, Internazionale and Real Madrid, scoring over 350 goals and winning countless titles, not to mention two World Cups and almost inspiring a third, still fall away to one rather unpleasant, undeserved and, frankly, misguiding stigma.

As his time at the top began to wind down, Ronaldo’s issues were well documented. His levels of motivation were in question as he approached his final years. Having grown up in a rather poor suburb of Rio de Janeiro, earning more than enough money and all the perks that come with that, as well as the success at such an early age, did perhaps go to his head. But when his weight, the most obvious signal of his downfall, began to increase, he was forever ribbed and mocked, dubbed “fat” Ronaldo. It seemed all earthshattering accolades from over 20 years at the very pinnacle had been forgotten.

To add to the lack of deserved adulation, the now 40-year-old, who retired after following tradition by ending his career in his homeland in 2011, cannot even lay claim to being unanimously recognised as the greatest footballer with his own name.

Just months after netting a sublime hattrick in the UEFA Champions League for Real Madrid at Old Trafford, knocking Manchester United out of the competition en route to the semi finals, defining his four-and-a-half years at the Santiago Bernabeu, Sir Alex Ferguson turned to an 18-year-old prodigy. Cristiano Ronaldo had already made history at Sporting Lisbon, making his way through their fabled youth system in just one year. It was a sign of things to come.

In many ways, the “Ronaldo” baton was passed. The striker, as opposed to the winger, named so in homage to his father’s favourite actor Ronald Reagan, was popular at Los Blancos, but looking back, his final “definitive” act at the top was netting twice in the 2002 World Cup final for Brazil against Germany.

Cristiano is the quintessential modern footballer, strong, fast, determined and unstoppable on the pitch. The Portugal international has a celebrity status and social media popularity to feed an ego necessary to succeed in this day and age. Statistically speaking, he dwarfs his namesake by sheer numbers. Even though Ronaldo, as previously stated, is a popular choice for the greatest “out and out” striker ever, he never scored 50 goals in a single season. During his spell at Real Madrid, Cristiano has done so in his last six seasons, all but one since leaving Manchester United in 2009.

But that’s just it, football isn’t played in the stats books, and Ronaldo pioneered the notion of superstardom enjoyed by Cristiano and so many others these days. When he joined Inter from Barcelona in 1997, the world had truly woken up to his brilliance. One season at the Camp Nou, scoring 34 goals and helping win three trophies, raised his stock. If a piece of individual brilliance encapsulated him, it was a goal at Compostela. With players hanging off him, Ronaldo combined brute strength and force with his remarkable technique to score after running a half-length of the pitch. His manager, Sir Bobby Robson, could only watch on in disbelief.

Everybody knows what Cristiano is all about. The personification of hard work and dedication, he too has to battle with unfair criticism. In that, and so many other ways, both Ronaldos are incredibly similar. Burning desire to make the best of any situation is as vital as natural skill and both had each in abundance.

The selfish streak that runs through Cristiano’s veins is the reason he is where he is today. Rather than constantly thinking about the Ballon d’Or or scoring more goals than arch-rival Lionel Messi, he is a leader for club and country, a driving force coming alive at the key moments. He has done that throughout his career, even now at 31, whereas Ronaldo slowed down in sight of his 28th birthday.

Again, though, it is too easy to say the striker gave up early. Injuries plagued his career, particularly with his knees. In 1998, at the World Cup he almost won, he was already the best player on the planet aged 21. By 2002, he was still playing in the shadow of a cruciate ligament tear, which kept him out for almost two years. The general consensus was he had lost his explosiveness and, aged just 25, he may be finished. Eight goals in Korea and Japan proved the world wrong. Ronaldo’s is a story of redemption, not failure.

To compare these two legends seems incredibly unfair and, like every other great, they deserve to be remembered for their own strengths. It is sad that both have sticks to be beaten with, but as the definition says, a phenomenon is a remarkable thing, and for talent, records and ability to bounce back from the edge, the Brazilian Ronaldo, “o fenomeno”, will always be the Ronaldo.

About the author- Harry De Cosemo

Harry is a European football writer specialising in English, Spanish and Italian football. He has worked for a number of top publications including MARCA in English, uMAXit football, FourFourTwo and The Press Association.