The Candidates: Who Will Get The England Job? 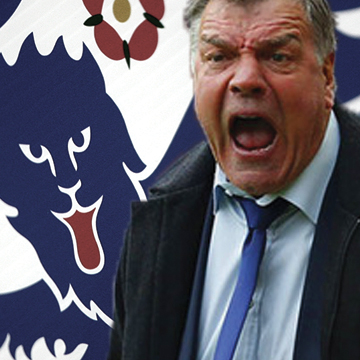 With Roy Hodgson’s resignation immediately after England’s shock Euro 2016 exit, the FA will be looking for a new manager. Hodgson’s tenure was not a travesty – far from it, but the Three Lions will be looking to improve considerably after consecutive major tournament flops.

But who are the candidates? Some have advocated a new, fresh manager from the English game, others recommend foreign investment, with the name of Dutchman Guus Hiddink frequently thrown into the mix. However, here I outline the foremost candidates for the job of England manager.

“Big Sam” is a seasoned manager and a respected figure in English football, especially in the Premier League. His experience varies from managing in Northern Ireland to the very highest echelons of football, and his credibility is undisputed. Known for his use of performance data and statistics, his brand of detailed and careful management could be crucial in rebuilding an English team crushed by constant disappointment and lack of belief.

However, despite managing mid-table sides in the Premier League, it’s debatable as to whether Allardyce has the necessary experience of managing to such a high level. In addition, with no international management background, Allardyce may find himself behind Jurgen Klinsmann in the pecking order in that respect.

He would, in general, make a sensible choice for the England job, but after years of hurt and disappointment, English fans may be after more of a drastic change.

He’s the new face of football, but at the age of just 38, Eddie Howe already has plenty to say for himself. After retirement from professional football, he joined Bournemouth as a coach, and worked his way up to manager. Hailed as the best young manager in the game, he has managed to guide Bournemouth from League Two to the Premier League; a truly remarkable feat.

His appointment as England manager would be an interesting one. He’s young and he’s good: possibly the best English manager to emerge over the last decade. He’s also respected for the work that he’s done at Bournemouth, and the unprecedented success reaped from his Football League odyssey, and with the Premier League’s elite taking considerable interest in Howe’s achievements, it may be best for the FA to act quickly and decisively.

Widely regarded as one of the most popular football managers in the English game, Howe’s appointment would displease few. However, with just one Premier League season under his belt, it will be fascinating to see whether young Howe can deliver for England.

Growingly unpopular with US supporters, Klinsmann has recently emerged as the designated foreign manager to rescue England. The former Germany striker enjoyed two fruitful spells at Tottenham Hotspur and has since come to be known as a hero at White Hart Lane. His managerial career has been promising, too, with spells as Germany and Bayern Munich manager. Now manager with the United States national football team, Klinsmann has enjoyed a successful tenure in America, taking them to the Last 16 in the 2014 World Cup, and winning the CONCACAF Gold Cup in 2013.

He seems a wise choice, due to the unavoidable fact that he has enjoyed relative success in all his posts as manager, especially on the international scene. He has an appetite for tournament football, and even guided Germany to third place in the 2006 World Cup, highlighting his knowledge of the international game.

It goes without saying that Klinsmann is the most decorated candidate here, with expansive knowledge of all manner of club and international competitions. However, the USSF will no doubt be keen to keep the German at the helm, so a bidding war may ensue if The FA become serious with their interest in Klinsmann.

Overall, all three candidates have their merits and achievements, but while Eddie Howe can promise a new beginning for the national side, it’s unlikely that he’ll end up as manager. The race is, realistically, between the two heavyweights of the contest: Sam Allardyce and Jurgen Klinsmann, and while they both have different styles of management and coaching, they each have the necessary capabilities to build on what Hodgson has engineered.

About the author – Tomos Knox

Tomos is a football writer whose work mainly focuses on the Premier League, International and European football in general. He is an avid football fan and first turned to football blogging in 2014, and has since been published by the likes of The Guardian and FourFourTwo. He was shortlisted for the ‘Young blogger of the year’ in the 2014 Football blogging awards.  You can follow Tomos here: tomosknox.wordpress.com