Andriy Lunin – The teenage goalkeeper destined for the top 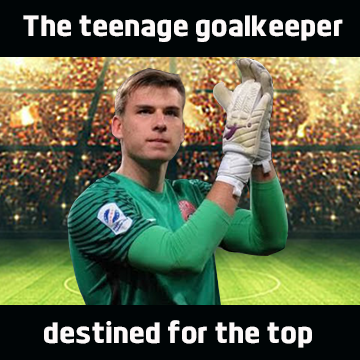 The saying if you are good enough you are old enough is certainly true of goalkeepers. Two of the greatest keepers of the 21st century became regulars as teenagers and went on to have incredible careers at the top of the game. Iker Casillas was a Real Madrid regular and Champions League winner at the age of 19 and Gianluigi Buffon became a Serie A regular at the age of 18.

Gianluigi Donnarumma is the best known teenage goalkeeper at the moment, having established himself as Milan’s first choice in 2015/16, he has continued to hold onto the shirt, while Benfica’s Mile Svilar became the youngest goalkeeper to feature in the Champions League this season when he appeared against Manchester United at the age of 18.

There is another teenage keeper who has established himself as a starter and his performances have started to attract admiring glances from some Europe’s biggest clubs. Andriy Lunin is not 19 until next month, and he already has two seasons experience in the Ukrainian Premier League under his belt.

As his first club Dnipro found themselves in financial crisis last season, Lunin was thrown in at the deep end at the age of just 17 and kept 10 clean sheets in 15 games, impressing enough to earn a move to Zorya Luhansk were he has continued his development and earned Continental experience in the Europa League, as well as establishing himself in the Ukraine Under-21 setup.

Although he has been linked to Manchester City, Real Madrid and Liverpool, it is believed that the strong and talented Lunin is close to joining Real Sociedad, where he could continue his development in La Liga, and maybe challenge Donnarumma for the title of Europe’s best teenage goalkeeper.