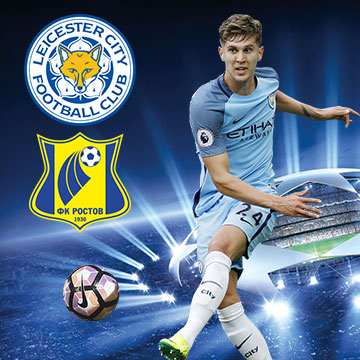 But aside from the Continent’s established elite clubs, there were several players, managers and clubs making their first appearance in the group stage of Europe’s premier club competition, with differing fortunes.

Premier League champions Leicester City extended their fairy-tale period by thumping Belgian champions Club Brugge 3-0 away from home. Foxes boss Claudio Ranieri may be no stranger to the Champions League, having managed the likes of Chelsea, Juventus and Internazionale in the competition, but many of his players were new to the stage.

Most notably, Riyad Mahrez, having joined Leicester from Ligue 2 side Le Havre in 2014, was experiencing his first Champions League encounter, and the Algerian showed why he belongs at the highest level, netting a wonderful free-kick and a calmly dispatched penalty to help his side cruise to victory.

England duo Jamie Vardy and Danny Drinkwater were also among those getting their first taste of Champions League football, and both impressed. Vardy put in a typically industrious performance up front, winning the penalty which Mahrez converted, while former Manchester United midfielder Drinkwater was a controlling influence in the middle of the park, and threatened the Belgian’s goal with long range shots on a couple of occasions. And former Aston Villa winger Mark Albrighton celebrated his first Champions League appearance with his first goal in the competition, capitalising on a goalkeeping error to give the Foxes an early lead.

Last season’s Russian Premier League runners-up, Rostov, are also experiencing their maiden Champions League campaign, but they didn’t enjoy the kind of welcome to the top table that Leicester had. Instead, Ivan Daniliants’s men underwent a baptism of fire at the Allianz Arena, going down 5-0 to 2013 champions Bayern Munich.

Sevilla manager Jorge Sampaoli arrived in Spain this summer with a great reputation following a successful spell in charge of the Chilean national team. The Argentinian is managing in Europe for the first time, and the 56-year-old faced the tough test of taking his side to Turin to face Italian Champions Juventus in his Champions League debut.

But the Europa League champions came away with a thoroughly respectable 0-0 draw at Juventus Stadium. Sevilla have been a tactically fascinating side to watch under Sampaoli, but their defensive organisation has left a lot to be desired so far in La Liga. So to shut out a team boasting such attacking talents as Paulo Dybala and Gonzalo Higuaín represents a mighty achievement.

Of the players to be making their Champions League bow, Tottenham Hotspur and England duo Dele Alli and Harry Kane stand out as perhaps the most high-profile. But they had a frustrating night as Spurs were beaten 2-1 at Wembley Stadium by Monaco, with another group stage debutant, French midfielder Thomas Lemar, stealing the limelight with a superb strike to double the away side’s lead following Bernardo Silva’s excellent opener.

Another Englishman making his Champions League debut in the first round of group stage fixtures was Manchester City’s John Stones. The former Everton man has already become a vital part of Pep Guardiola’s system at the Etihad, with his ability to bring the ball out of defence and pass between the lines. But, in truth, he had a pretty easy night against Borussia Monchengladbach, as the Citizens hammered the Bundelsiga side 4-0.

Borussia Dortmund signed a host of young, attacking talent this summer, to add to the promising youngsters already on their books. In their group stage opener away to Legia Warsaw, five of Dortmund’s prodigious young players made their Champions League debuts.

Ousmane Dembélé, Raphaël Guerreiro, Julian Weigl and Christian Pulisic all started and starred during BVB’s 6-0 victory, with Turkish winger Emre Mor coming off the bench in the second half. It was a brilliant attacking performance from Thomas Tuchel’s men, with Guerreiro even managing to mark his Champions League bow with a goal in the rout. These players will undoubtedly have long and successful futures in the competition.

Ryan is a Midlands based freelance sports writer specialising in European football. He has been fascinated with the continental game ever since he was presented with his first football kit at the age of 7 years old whilst on holiday in Spain – a Barcelona shirt with ‘Romario 10’ printed on the back. A contributor to numerous footballing websites, Ryan has also covered martial arts for local and national print publications.