5 Of The Worst Football Injuries Of All Time 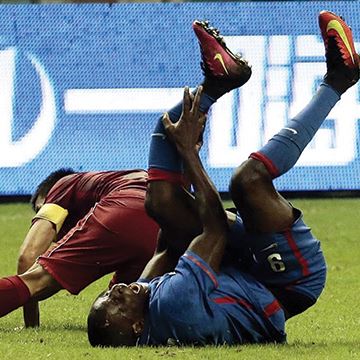 When Demba Ba suffered a horrific broken leg last week, a series of gruesome videos and images circulated around social media like wildfire. The incident with the former Chelsea man occurred during a game with his new club Shanghai Shenhua and their Chinese rival outfit Shanghai SIPG’s captain Sun Xiang.

Any injury to a professional footballer is upsetting to see, especially for the respective supporters of the player in question, but to suffer such a devastating injury often makes one wince.

Yet, despite being 31-years-old and arguably coming towards the end of his career, the Senegal international has insisted that he does not intend to retire from football following his leg break.

In fact, the striker is adamant that he will return to on-field action sooner rather than later, with his agent claiming that he is hoping to return to action by just March next year, in time for the beginning of the 2017 Chinese Super League season.

However, many footballers in the past have suffered equally, if not more, devastating injuries which have ultimately cut their sporting careers short. Here we take a look at a number of other unfortunate players who have suffered similar serious injuries and what impact it had on their respective careers.

One such case study is David Busst, whose professional career came to an end as a result of an injury often said to be one of the worst footballing injuries of all time. When playing for Coventry against Manchester United back in 1996, the Englishman collided with opposition players Denis Irwin and Brian McClair just two minutes into the game.

As a result, he suffered detrimental compound fractures to both the tibia and fibula in his right leg and was withdrawn from the game on a stretcher as his blood was removed from the grass using sand and water. It was even at one point feared that he would be forced to have his leg amputated due to infections to the injured tissue.

A subsequent injury which was compared to Busst’s was that of Luc Nilis. The Belgian was a prolific forward and moved to Aston Villa on a free transfer following his successes in the Eredivisie with PSV Eindhoven. However, in a league clash with Ipswich Town in 2000, Nilis himself had a physical clash with goalkeeper Richard Wright, providing a double compound fracture of his right shin.

At one point the injury became infected and, like Busst, Nilis even feared a possible amputation; although this never happened, his career was over.

A similar scenario panned out with Eduardo da Silva. Back in February 2008, the Brazilian suffered a broken left fibula and an open dislocation of his left ankle during a fixture between his Arsenal team and Birmingham City.

The injury was sustained due to a tackle by Martin Taylor and the injury was so graphic that Sky Sports, who were broadcasting the game live, opted against replaying the incident.

However, unlike Busst, Eduardo did manage to return to playing action and now at 33 years of age, the striker is currently plying his trade for Ukrainian outfit Shakhtar Donetsk.

Another Arsenal star who suffered a devastating injury but managed to overcome it was Aaron Ramsey during the early days of his professional career. In February 2010, aged just 20, the Welshman was tackled forcefully by Stoke defender Ryan Shawcross, which caused a double fracture in his lower right leg, breaking his tibia and fibula.

Ramsey was hospitalised, although just over a month later, the midfielder was able to walk without his crutches and he returned to training in October of the same year.

Another unfortunate player to have broken their leg during a game is Djibril Cisse. In fact, the French striker is perhaps one of the most unfortunate players ever as he has actually broken both of his legs on separate occasions throughout his career.

The first leg break happened when playing for Liverpool against Blackburn Rovers in 2004. Cisse was challenging Jay McEveley for the ball; however, his left boot was caught in the pitch surface, and his tibia and fibula were broken.

He later broke his right leg whilst featuring in an international friendly versus China. Cisse was challenged by the Chinese captain Zheng Zhi and the resulting leg twist whilst falling caused an open fracture of his tibia.

Despite these two potentially detrimental injuries, not just physically but also psychologically, the 34-year-old did well to continue with his career, managing to play for a whole host of outfits.

These clubs were Marseille, Sunderland, Panathinaikos, Lazio, Queens Park Rangers, Al Gharafa, Kuban Krasnodar, Bastia and JS Saint-Pierroise, constituting Cisse’s career as a journeyman, before he retired in October 2015 as injuries finally got the better of him.

We wish Demba Ba well and hope that he can recover from his injury swiftly in order to continue with his footballing adventures in China.

About the author – Jordan-Luke McDonald

Jordan-Luke is a football writer who was a finalist at the National Football Blogging Awards 2015 in two categories. He has contributed towards the Manchester Evening News, CaughtOffside and TheFootyTimes to name but a few.